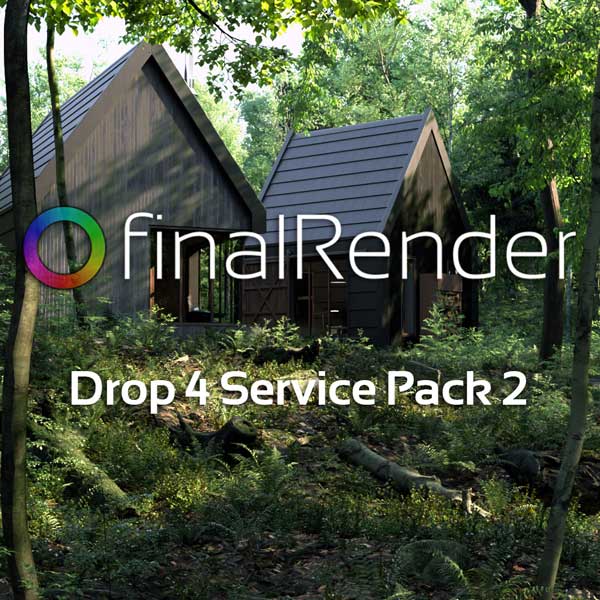 This new release offers important bug fixes, improvements and new features. finalRender Drop 4 SP2 adds more speed, which is always a nice thing to have especially when Instancing millions of objects, Instancing  has been improved again! It is considerably faster and uses less memory than any previous version of finalRender.

Instancing - there is no longer the need to specify the Maximum Instance count when using instances in a scene.The relevant user interface entry for Max Instances has been removed and is obsolete now. Instance count can now change within an animation. This is on CPU and GPU. Dramatic speed improvement when using tP and forestPack instances, the same improvement can be found in fR-Scatter.

fR-Light Material - some changes have been done to the light material to enhance workflow and render speed. Now, the filter option has a separate Opacity and Color texture map control option. The former material option has been removed completely.

fR-Multi/Sub Map - this material has additional options to control the change of Colors/Maps. Color/Map switching is now possible by Particle ID and a custom map, opening up possibilities to use thinkingParticles or any other particle system to drive material changes at render time.

New Render Element: ExtraTex - a new Render Element has been added that allows to render a separate element with a specific texture map for all or a selection of objects.

finalRender Proxy - fR Proxy objects have been improved in seed

Improved GI Sampling - when rendering transparent objects the generation of noise has been considerably reduced.

+ Issues found with proxies and animations have been isolated and fixed.
+ Incorrect shadows when using translucent objects has been fixed.
+ Potential crash when using RailClone and referenced objects has been isolated andfixed.
+ finalRender frame buffer now works with high resolution displays
+ CPU denoiser did not write proper alpha channel information in some situations, this is fixed now.

This Service Pack is available for FREE to all subscription users in good standing! So bring up cebas Product Manager and get the latest stable release! automatically installed.

finalRender is under constant development, and it is evolving fast!